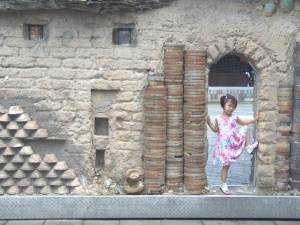 A child poses in a doorway that is part of an installation of street art. photo: A. Singer

Last week, Angela Singer shared observations, stories, and photographs from her month-long trip to China last summer. Ms. Singer spent two weeks in Hangzhou City studying at Zhejiang University — the number 3 university in China! — as part of a trip sponsored by the National Consortium for Teaching about Asia (NCTA), followed by another two weeks traveling on her own to some of the most beautiful places in China. 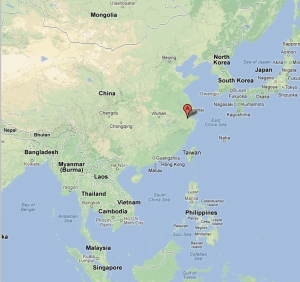 attractions, including the famous West Lake, a UNESCO World Heritage Site. Water features and cultivated lotuses are very common. The flowers, seeds, young leaves, and roots are all edible, and lotuses have cultural and sometimes religious significance in a number of Asian cultures.

We learned about the new class of entrepreneurs who are starting up small businesses such as private English language schools and small fashion houses. We also learned about the popularity of Western-style cakes for children’s birthday parties; the pictures looked much like like the fruit-covered cakes that are available here in the U.S. from Chinese bakeries. 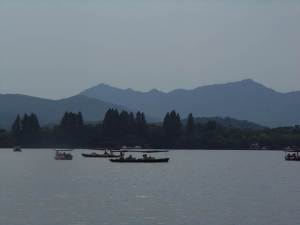 Ms. Singer also told us about the situation of migrant workers and their families. If workers bring their families on the road with them, the children are not allowed to attend the local schools; they must attend their home schools or none at all. Migrant worker housing looks the same all over; it consists of cheap modular 2- or 3-story apartment buildings that get plopped down wherever there is space. There are some services for migrant families, including community centers with ovens to use for things like baking birthday cakes.

We heard about the Terra Cotta Warriors and Horses, which were discovered by local farmers. The figures were originally brightly painted, but the paint is destroyed by exposure to the air. Archaeologists are continuing to unearth and reassemble these figures at the site.

Terra cotta replicas of the warriors and horses, some surprisingly large and heavy, are a popular souvenir  in the area.

Ms. Singer was also able to visit a silk museum, karst mountains and caves, a part of the Great Wall, and other places

to which her pictures do better justice than these words. We thank her for her fascinating talk and look forward to her next Asian trip! 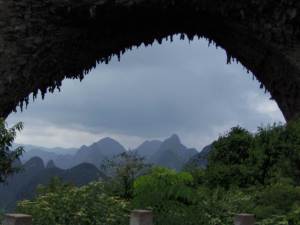 Part of the Great Wall. photo: A. Singer

NOTE: This post describes the already-past 2013-14 AAUW-MWB scholarship opportunity. To get the most current information, please click the “Scholarships” tab at the top of this page, or go to this link.

The Melrose-Wakefield Area Branch of the American Association of University Women is pleased to offer a $1,200 scholarship for the 2013-2014 academic year.

This scholarship is available as a result of the fundraising activities of the Branch and donations received in memory of branch members and their loved ones.

To be eligible for the scholarship, you must:

Special consideration will be given to applicants who have maintained high academic standing and can demonstrate a need for the scholarship for a specific purpose related to educational goals.

All applications will be processed anonymously.

To receive an application, candidates should send a self-addressed stamped envelope to:

Or an email request to jac_sullivanandclark@comcast.net

Applications are available immediately and must be returned by April 5, 2013.

The recipient of the scholarship will be notified prior to May 8, 2013. 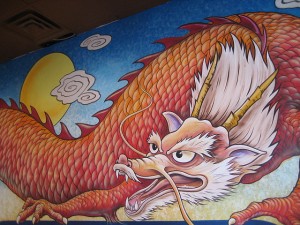 Please join us on February 13th for Angela Singer’s presentation on her study tour of China this past summer. She spent two weeks studying at Zhejiang University with the University of Pittsburgh Chapter of the National Consortium for Teaching about Asia (NCTA) followed by another two weeks traveling through China on her own.

NCTA is a university collaborative funded by the Freeman Foundation that provides professional development on East Asia to teachers. The organization’s goal is to encourage and facilitate teaching and learning about East Asia in elementary and secondary schools.

Ms. Singer will discuss economic changes in China’s cities and the new capitalism in China, as well as showing a number of slides from her trip.  Those who attended her presentation on Japan last year will recall that Ms. Singer is a keen and insightful observer with a knack for taking vivid, story-telling photographs. She is an English teacher and Department Chair at Melrose High School (go Red Raiders!).